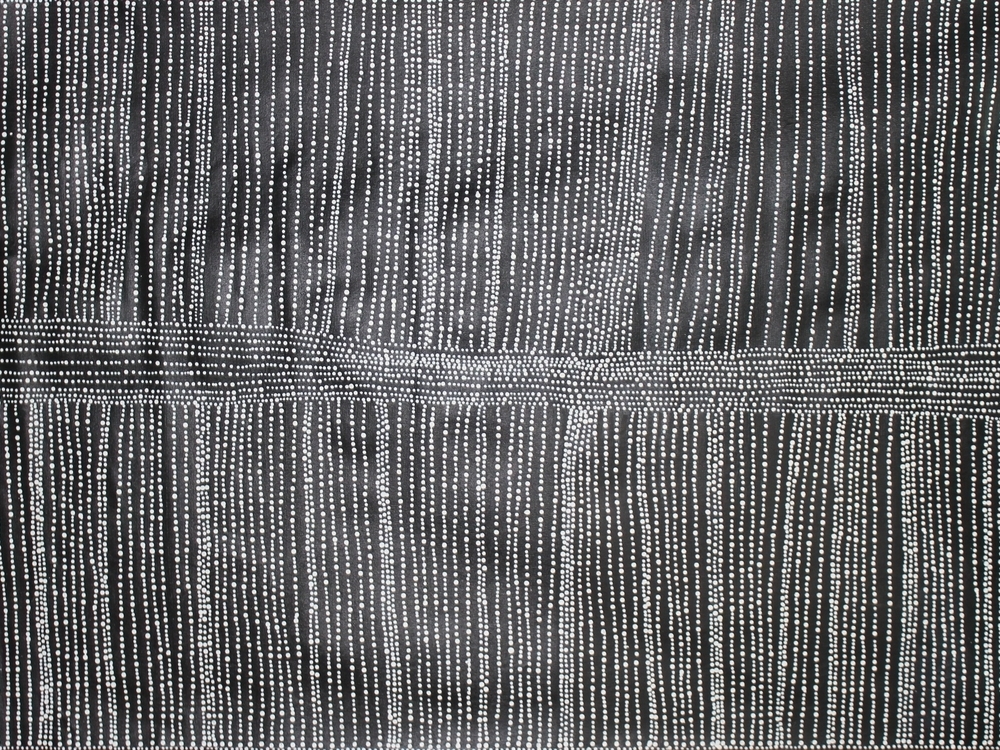 Dorothy Napangardi is of the Warlpiri language group. She was born in approximately 1952 at Mina Mina to the west of Yuendumu in the Tanami Desert of the Northern Territory, approximately 420 km north-west of Alice Springs. Sadly Dorothy died in a car accident on 1st June 2013. Dorothy had a very individual painting style which she developed by elaborating on the traditional designs of the Kurawarri (Dreaming). The consistently high quality of her work was winning her acclaim as a fine artist of distinction.

Dorothy was one of the traditional owners of Mina Mina, through which her ancestry linked her to the Dreaming. Her kinship responsibility was to her subsection group of Napangardi/Napanangka. They must know the songs, dances, rituals and body paint designs to ensure that this knowledge is passed on to their nieces as is the obligation of traditional law. Artists often refer to this as “keeping the Dreaming strong”.

Mina Mina is a highly significant sacred site as it is the point of origin for Karntakurlangu Jukurrpa (Women’s Dreaming) for not only the Warlpiri but also for the Kukuja whose traditional lands are to the west. It was at Mina Mina during the Jukurrpa (Creation Era) that digging sticks that had emerged from the earth, were taken by ancestral women as they commenced their journey along the Dreaming route travelling east. Today these digging sticks are represented by the kurrkara (desert oaks) at the site. Mina Mina consists of two large claypans with several mulju (water soakages).

Dorothy grew up in a traditional Aboriginal social environment and first came in contact with white society when the family walked into the pastoral station of Mt Doreen. She learnt the law and the stories associated with her country whilst walking the desert with her parents and siblings as a young girl. In turn, her five daughters will learn by watching and listening to their mother, aunties, and grandparents singing the song cycles that belong to the country she painted. Belonging to the Napangardi/Napanangka skin group, Dorothy also painted the Bush Plum Dreaming.

As part of the adjustment to the changing lifestyles brought about by European settlement, the acrylic movement has become increasingly important as a medium through which the Dreaming is passed from generation to generation.