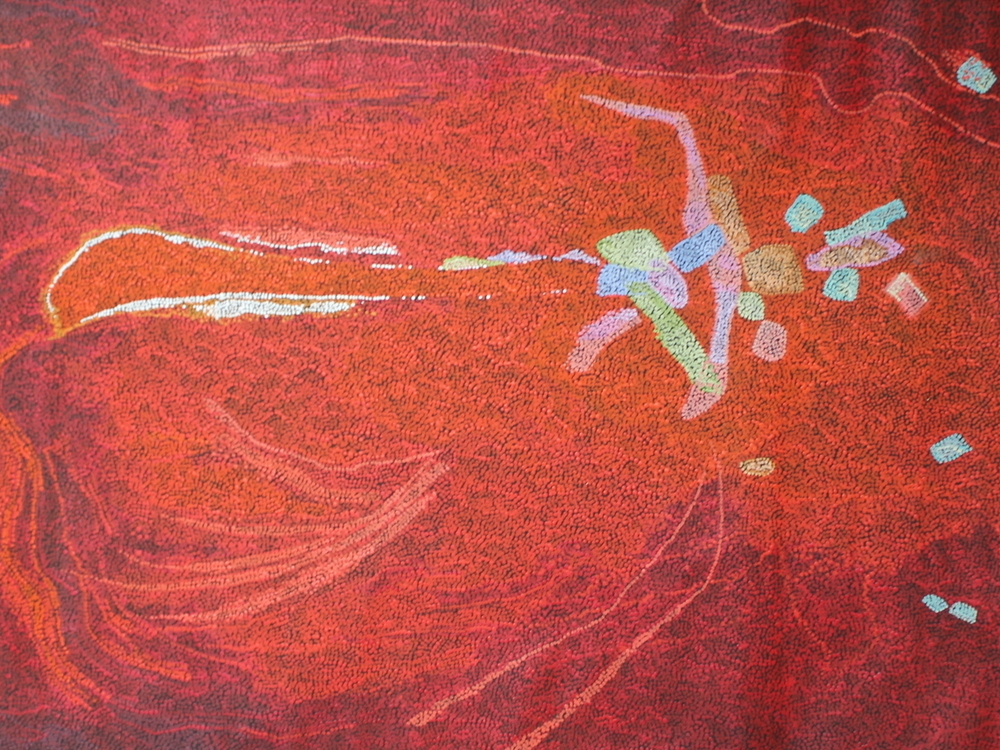 Helen McCarthy Tyalmuty was born at Tennant Creek in 1972. After spending most of her childhood at Nauiyu Nambiyu Community (Daly River), Helen completed her education at Mount St Bernard College at Herberton on the Atherton Tablelands in Far North Queensland.

Helen studied teaching, initially at Batchelor Institute of Indigenous Education in the N.T. and completing her degree at Deakin University in 1994. It was during this time at university that Helen’s art career started to take shape. In 1993, she was already involved in her first art festival. Her painting continued to develop after moving into teaching full time. For 10 years she successfully combined a job as a teacher in remote communities with her painting activities. Around 2003, Helen devoted herself to painting full time, gradually honing her skills and developing her own unique approach to the dreamings she portrays.

In 2006, Helen had her first solo exhibition in Sydney and further solo and group exhibitions quickly followed in Melbourne and Singapore. In August 2007, Helen was honoured to receive the People’s Choice Award at the 24th Telstra National Aboriginal & Torres Strait Islander Art Award for her painting Tyemeny Liman’s Wutinggi (Grandpa Harry’s Canoe). She says of her grandfather “In his day he was the best canoe maker in his country. It’s a sad story and a good story at the same time. It’s the last canoe that he ever made.” Helen was also a finalist at the 2008 Telstra Awards.

In 2011, Helen was commissioned to paint the artwork used as the stage backdrop for the Oprah Winfrey show that was filmed in Australia.

After a creative lull, in 2015 Helen returned to her childhood home, Daly River. That return to her roots and to country has been the catalyst for an immense surge of creative output, as witnessed in her two solo exhibitions at Kate Owen Gallery in 2016.

Helen has a relentless passion to learn all she can about culture and country from her elders, as well as the ability to effectively communicate through her art using an array of styles, intricate dotting and delicate brushwork techniques, abstract imagery, bold colour use and intuitive interplays with space and form. Her art can be multi-layered, complex and colourful, or it can be restrained, solemn and occasionally ominous.

Helen explains that she finds inspiration all around her; in her deep connection to country, in the traditional practices associated with a life living bush and in her incredible family stories. Helen’s connection to country and culture combined with her non-indigenous education are the foundations she uses to express her ideas and experiences in her own unique manner. This capacity to give contemporary interpretations to her ancient Dreaming stories makes her a distinct voice in the contemporary Indigenous art scene today.