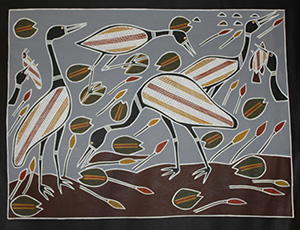 Norman started painting in 1982 after watching his adoptive aboriginal father painting. Norman is recognized as one of the best artist from the region. Norman has three children and is up to number nine wife.

Norman loves going hunting and fishing when he gets back to his country.