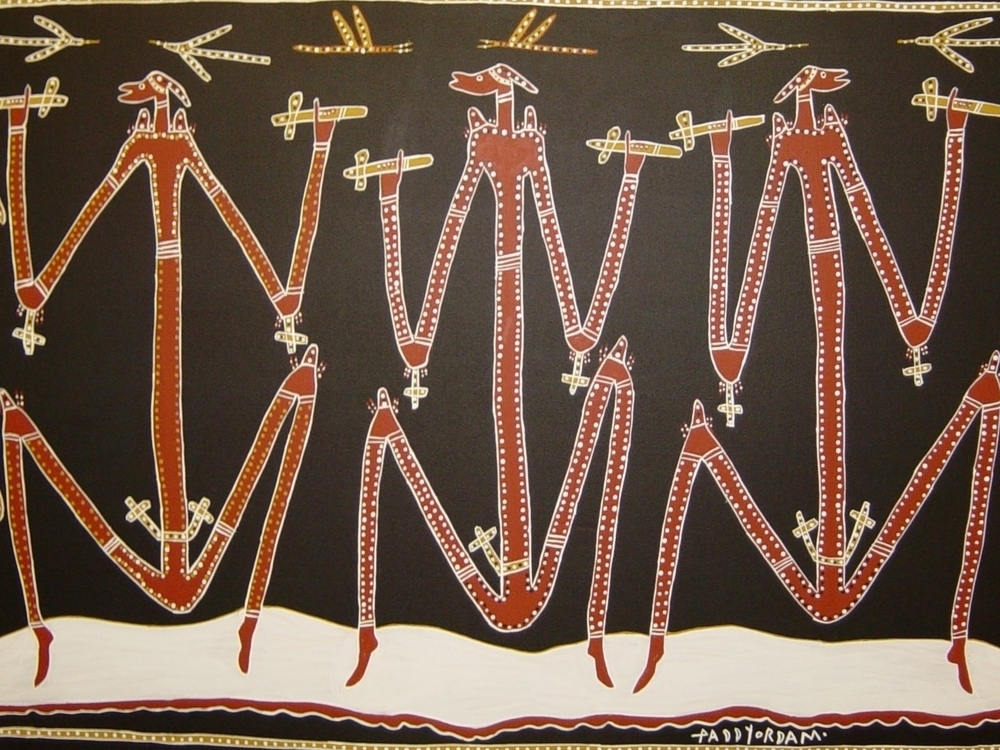 Paddy was born in Arnhem Land in the early 1930’s and died 1st June 2006. His country was once called Bamdibu (Bumdubu) near Bulman Station.

As a child, Paddy grew up in Maningrida an aboriginal community on the top end of the Northern Territory

Paddy started working as a boy around cattle yards, which finally led him into the career of a stockman for 20 years. Before this, he spent much of his time hunting and learning culture and customs from his father and uncles. Paddy could remember being taken to a sacred location where he had been told many Dreamtime stories of how customs came to be and why Aboriginal people practice them.

During the time he was a stockman, a strong movement began in Australia for equal rights for all Aboriginal people. This movement was headed by Aboriginal activists, some of which included Charles Perkins and Gary Foley. At the same time, Vincent Lingari, leader of the Garringii people who lead the “Wave Hill Station Walk Out” and so began the Land Rights movement. Paddy says he was part of this movement, actively involved in claiming Bumdibu as his traditional land for his clan. He resided over this land as Jungai (caretaker, police officer)

Paddy was taught to paint by his father but did not begin to paint seriously until the early 1970’s. He was also recognized as a storyteller, bark painter, sculpture, dancer, singer and musician.

Paddy grew up with a familiarity of Central Arnhem Land rock and bark painting traditions; however, he developed an idiosyncratic style which fused the figurative schema of western Arnhem Land with the narrative capacities of the north-east producing dense pictorial paintings divided into sequential segments. Many of his small mythological barks follow the usual schema of figures painted in plain perspective onto a monochrome background. In his narrative works, stick-like figures are arranged across the painting surface in busy compositions of great dynamism. For the division of the pictorial sequences in his more elaborate works, Paddy preferred the use of fluid lines, rather than regular grids, to isolate each of the events in the story. In reference to his cattle owner days, he described these divisions as boundary lines or fences which delineate each sequence, like a paddock.

In his early works of art on bark, Paddy described events, some of which have been cultured learning’s, others Australian history, which have been recorded from an Aboriginal point of view. These works are now housed in all the major Art Institutions in Australia.

Paintings on bark and canvas are often crooked, the paint rough and unfinished but an impressive, gestural power dominates each painting. Paddy further advanced his painting skills from natural ochre pigment on bark to high quality acrylic paints on linen or canvas. He was able to maintain his unique style without compromising his traditional iconography.

Paddy’s unique depiction of the Mimi Spirit is the centre piece for most of his paintings. He often painted a dancing Mimi Man, which he said was a good Mimi, he looks over the land as a protector, and only comes out at nights. The Mimi is not visible during the day.

Paddy always included some small representation of the bush animals that he grew up with, many of these animals are the focal point of significant stories that were passed to him by his father. Animals such as the long and short neck turtles, file snakes, leeches, butterflies, rainbow serpent, (Bolong) and of course the mosquito which is Paddy’s totem and are often seen accompanying the Mimi figures which Paddy depicts in his artwork.

Despite the technical roughness of his early work, Paddy’s passion for storytelling on bark was highly valued by the Manager of Mimi Arts, Chips Mackonity, who put together a collection of over thirty of his works between 1982-84. This collection, destined to become part of the proposed Katherine Cultural Centre display, is an invaluable record of Paddy’s skills as a painter, philosopher and oral historian. Some of the most memorable works relate to the events of World War II, the introduction of Christianity and welfare rations, the differences between black and white law and the Rembarrnga story about Captain Cook. This creation myth which synthesizes aspects of European history, Yolngu and Christian cosmology, was subsequently recorded in the film Too Many Captain Cooks in 1988.

During the Bicentennial year when the film was officially launched, Paddy also travelled to Canberra for the opening of the Hollow log memorial at the National Gallery of Australia as a tribute to all the Aboriginal people who have died as the result of European contact. Thirty of the two hundred poles in this installation were made by Paddy, who delivered the following speech at the opening:

“This is a serious thing, that’s why the lorrkon (hollow log) is made, to make you remember, for many years. You know different tribes all over the world, really from the same people.

That is why we are making this lorrkon, we are afraid we are going to lose our culture, lose our Dreamtime. We are not book men we are letter-stick men. You cannot understand. We cannot even understand white man’s side. Our lorrkin got more power. You can read and write your own way. We can read and write our own way. That is why we make this lorrkon. All over the world nobody different family, all the same family. One sun, one moon, we live.”

This speech alludes to the philosophy which Paddy holds dear and which provides the impetus for him to paint. Fundamental to this is his abiding belief in the universality of humankind and the power of art as a medium for passing on knowledge. In this respect Paddy sees all his painting, whether versions of Rembarrnga myth or interpretations of fact, as a history painting and as an important strategy for passing information on from one generation to another.

While undertaking the commission for the Aboriginal Memorial in 1987, Paddy made an unexpected shift to wood sculpting, producing the gracile Balangjalngalan spirit beings which he says are not like the Mimis of the rock country but are from the plain’s country around Bamdibu.