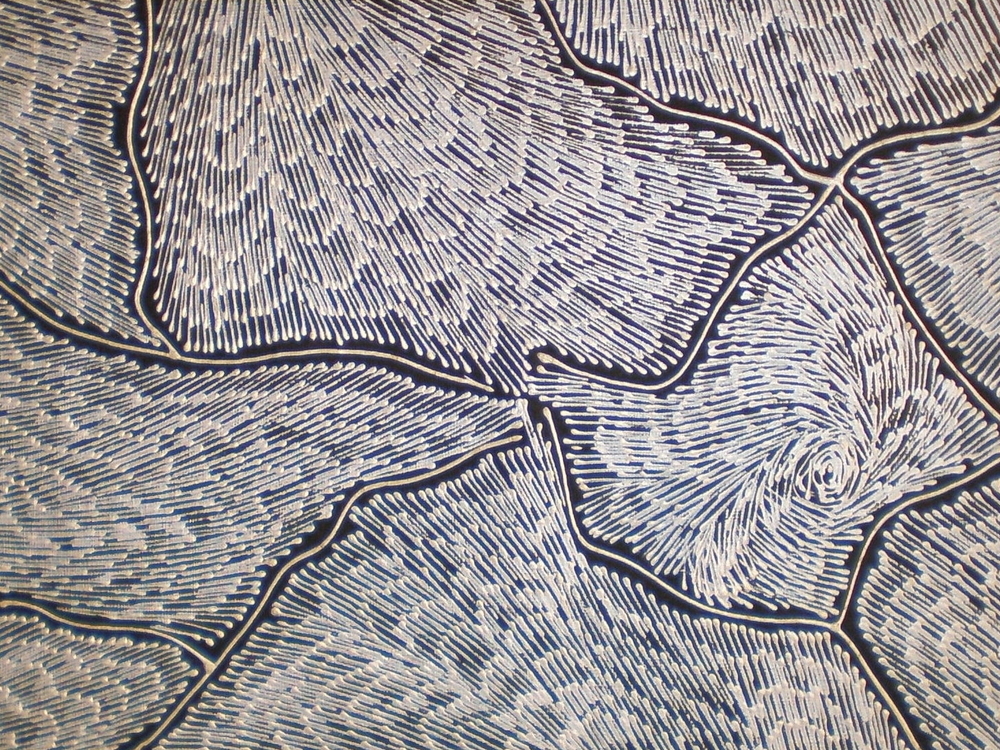 Sarrita King was born in Adelaide on March 5th 1988. She spent most of her youth in Darwin, where her Mother still re­sides. Today she resides in Adelaide and spends much of her time painting along side her sister Tarisse.

Sarrita often visited her father in Adelaide spending time with him in his studio. During 2005 Sarrita made several ex­tended visits having become very interested in his art. After completing high school in Darwin and being ac­cepted by the South Australian Institute of Sport for netball Sarrita decided to move to Adelaide permanently. Sarrita, along with her sister Tarisse, now spends most of her time in their studio working on her art.

Sarrita’s inspiration is the amazing environment she grew up surrounded by in the Northern Territory, from the big rains to the lightning storms and the constantly changing earth. Sarrita reflects on much of her experiences with family members, especially her father who taught her about her Aboriginal heritage, the elements and the connection to our world in general.

Sarrita feels her art is a way of continuing to remember her father and all that he passed on to her. Furthermore her art continues to pass on his amazing love of life. Sarrita has found that art has subtly taken over her life and is a tool which allows her to connect to the world around her especially people. She is looking forward to challenging herself over the years through her art and the unusual life paths it will expose to her.

The lightning series of paintings have been inspired by the big storms occurring in the Northern Territory. Growing up Sarrita was always fascinated by the rain and lightning seen in the distant horizon. Sarrita would find new patterns and colours every time she watched these amazing natural occurrences.

This painting is inspired by the amazing sandhills found throughout Australia. Their colours and movements have always fascinated Sarrita. Her father would tell her how the patterns made by the wind are repeated throughout nature. Sarrita reflects on this when looking from a plane and seeing the similar movements of the sandhills and the waves of the ocean.

Inspired by the different water found throughout Australia, these paintings seek to capture the movement and the colours of this life-giving element. Sarrita listened to her father explain the importance of water to the Aboriginal culture and all human kind. Sarrita feels the elements are a connection to her father and the world around her.

Language of the Earth

This painting is a representative of the earth’s story. The history of the land where we come from connects us to our family, our culture and all living things. Sarrita seeks to express her impression of the land and some of its stories. The symbols within the painting are patterns for the viewer to connect with but the layout of the painting has its own story.

The element fire inspires this painting. Not only is fire important to us and the land it connects us with our ancestors. Sarrita’s father would explain the connection of all things in life and explain to Sarrita that her ancestors would experience the same connection to the earth as her when feeling the warmth of fire and looking into the deep colours

This painting reflects the beautiful range of colours found in the bush areas of Australia. The movement represented by the line work shows the amazing patterns formed throughout the different plant life.