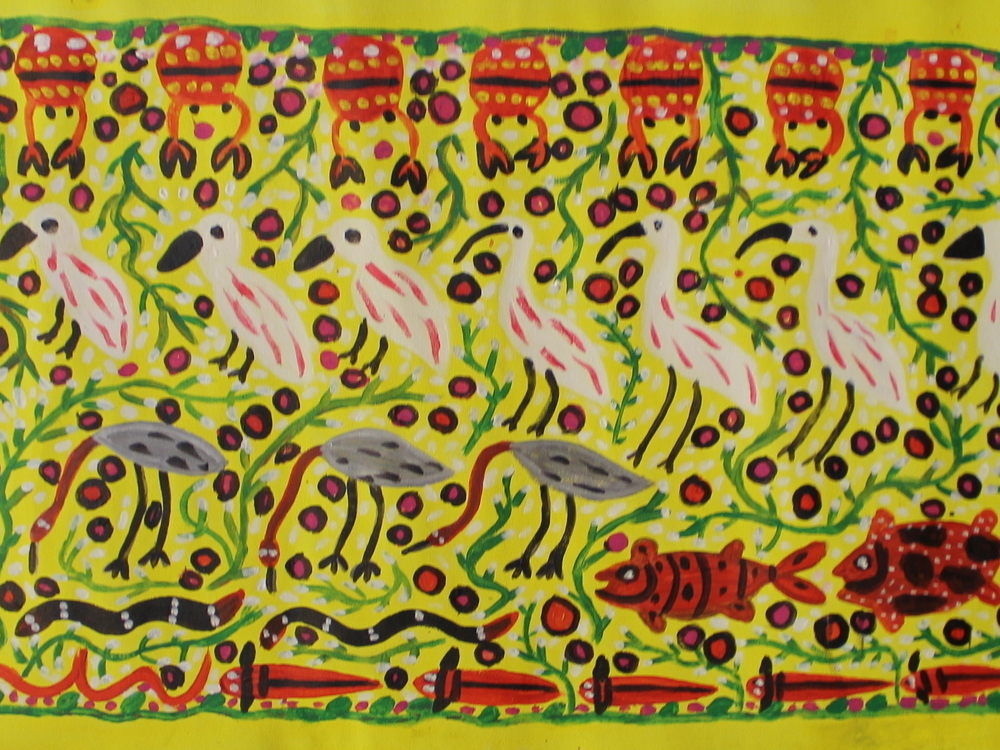 Amy Johnson Jirwulurr is known for naïve descriptions of the plant and animal life found in the local land and billabong regions. Her genius lies in her innocent depictions which are enhanced with her choice of bright color opposites. Her work often combines derivative bark painting and figurative styles similar to those her famous husband, Sambo Burra Burra.

Generally the images of totemic animals are understood as representing inherited law from her husband. Many animals are associated with secret songs involving the search for sacred sites to enact the rituals surrounding circumcision and mortuary ceremonies. This right accompanied by her deep love and appreciation of her homeland and as awareness of the intricate cycles of plant and animal life is manifested in her work. These works reflect innocence and happiness as well as bright colours, which have become one of Jiwulurr’s trademarks.

Ngukurr, where Amy is from, was formally a Mission Station established by the church of England Mission Society in 1908 on the Roper River Mission. The church was replaced by a government agency in 1968 and its name was changed to Ngukurr, which means a place of many stones.

In 1987 under the guidance of the Northern Territory Open College of TAFE, the people at Ngukurr on the Roper River had access for the first time to acrylic paint and canvas. The raw, bold and brightly coloured images that emerged shocked and defied preconceptions of Aboriginal art.

Amy Johnson Jirwulurr is in most state and major collections in Australia, including the Australian National Gallery, Canberra.