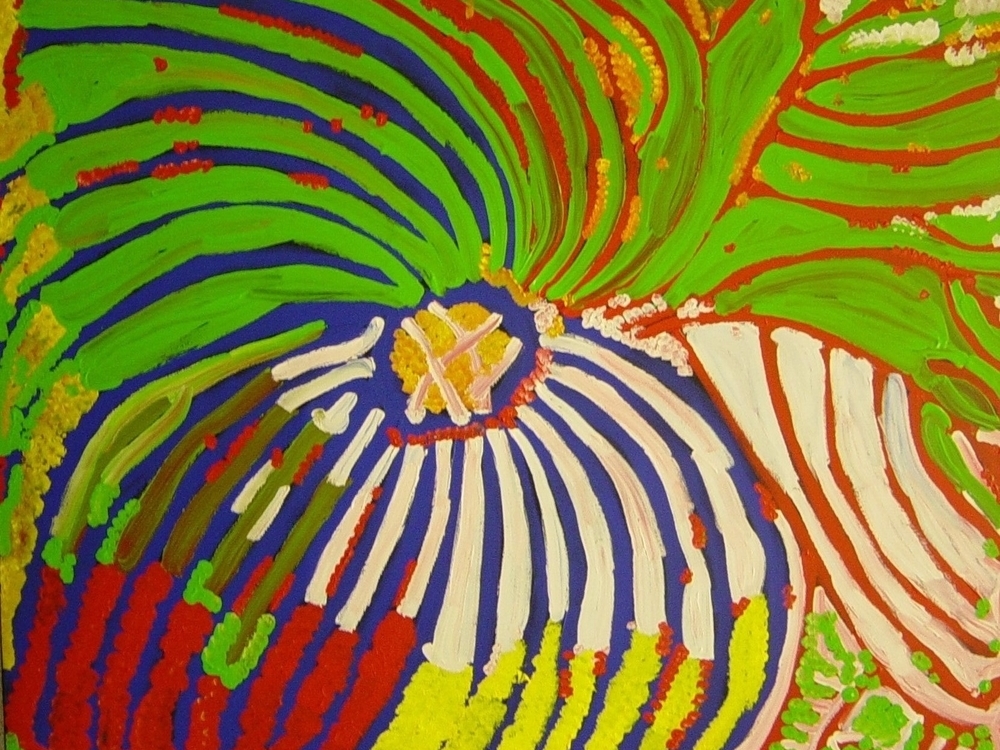 Lorna was born around 1920 in Yumurrpa country which is situated near the Granites in the Tanami Desert, in the Northern Territory. Lorna lived at Lajamanu community and occasionally in Katherine. Lorna passed away in December 2006. The Yarla (Yam) Dreaming track originates from this region and travels north toward Lajamanu. Lorna was a senior Warlpiri (language/tribal law group) woman.

Whilst Lorna had “painted up” all her life, meaning that she was raised as a skilled painter of decorative body designs for ceremonies, her artworks on canvas only dates from 1986. Lorna initiated her rise in the art world by painting for the Warnayaka Art Centre, Northern Territory. In recent years, Lorna’s work has become increasingly extravagant, abstract and sensual, catching the attention of art collectors from around the world and giving rise to comparisons with the late Emily Kame Kngwarreye.

Lorna’s style was extremely bold, free and abstract. She applied the paint in liberal quantities to the brush before touching down on the canvas and layering the colours one upon the next. Upon completion of the work, only the most public aspects of her Dreaming are revealed to the observer, the most intimate details are concealed. Lorna, atypical of many contemporary aboriginal artists, also used a palette of vibrant colours.

Lorna held her first solo exhibition in Melbourne in 1997, and subsequently had solo exhibitions in Melbourne annually. She had also participated in numerous group exhibitions at the Warnayaka Art Centre, where she is also a member of the artist’s co-operate. In1997 Lorna won the Conrad Jupiters Art prize at the Gold Coast City Art Gallery for her Yarla Dreaming. Her contribution to contemporary Australian art was recognized in 1998 when she was invited to participate in the Triennial John McCaughey Memorial Art Award at the National Gallery of Victoria.