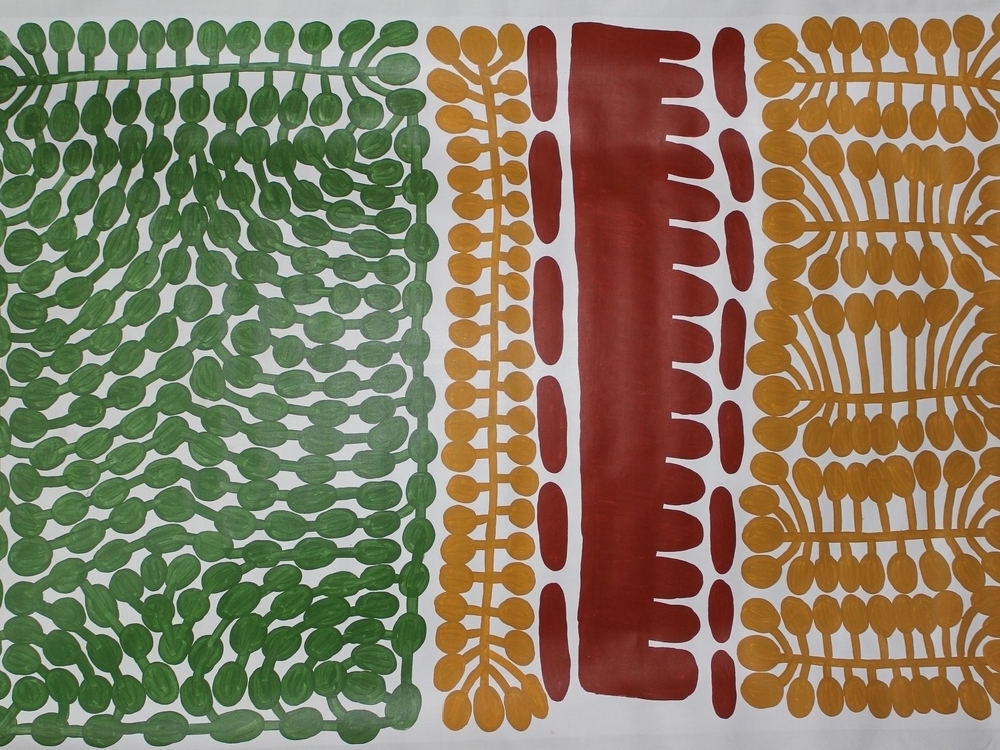 Born at Haasts Bluff, Mitjili Napurrula is the daughter of Tupa Tjakamarra (now deceased) and Tjunkiya Napaltjarri. Mitjili came in from the desert with her mother. Dispossession and drought were only two of the factors that led to a series of migrations from the desert to mission or government settlements in the mid-twentieth century. Following the outstation movement of the late 1970s and early 1980s, Aboriginal communities sprang up throughout the region, each home to a distinctive art movement. Mitjili’s brother, Turkey Tolson Tjupurrula, was one of the founding members of the Papunya Tula Artists cooperative. Mitjili and Turkey Tolson had the same father, from whom they inherited the right to paint works related to llyingaungau in the Gibson Desert. This site, south of Kintore, is where the artist’s Mutikatjirri ancestors assembled their kulata (spears) for a conflict with the Tjukula men. Allusive works that refer to the straightening of kulata by Tjupurrula are among the landmark painting of the movement’s 30-year history.

Mitjili is married to Long Tom Tjapanangka, a very well-known artist from Haasts Bluff. She remembers, ‘…After I got married, my mother taught me my father’s Tjukurrpa in the sand, that’s what I’m painting on the canvas’, a women’s interpretation. This dreaming depicts the making of spears, an important aspect of men’s business. The straightening of spears was often painted by her brother turkey Tolson. Her paintings usually relate to wooden objects and their sources, such as trees from which the spear shafts and other objects are made. Mitjili works show a strong use of pattern in formal arrangements. She commenced painting in 1993 and at first followed the style of painting of the Papunya Tula artists from Papunya; she then developed her own style, a simplified design in striking colours. She lives and paints in Haasts Bluff.