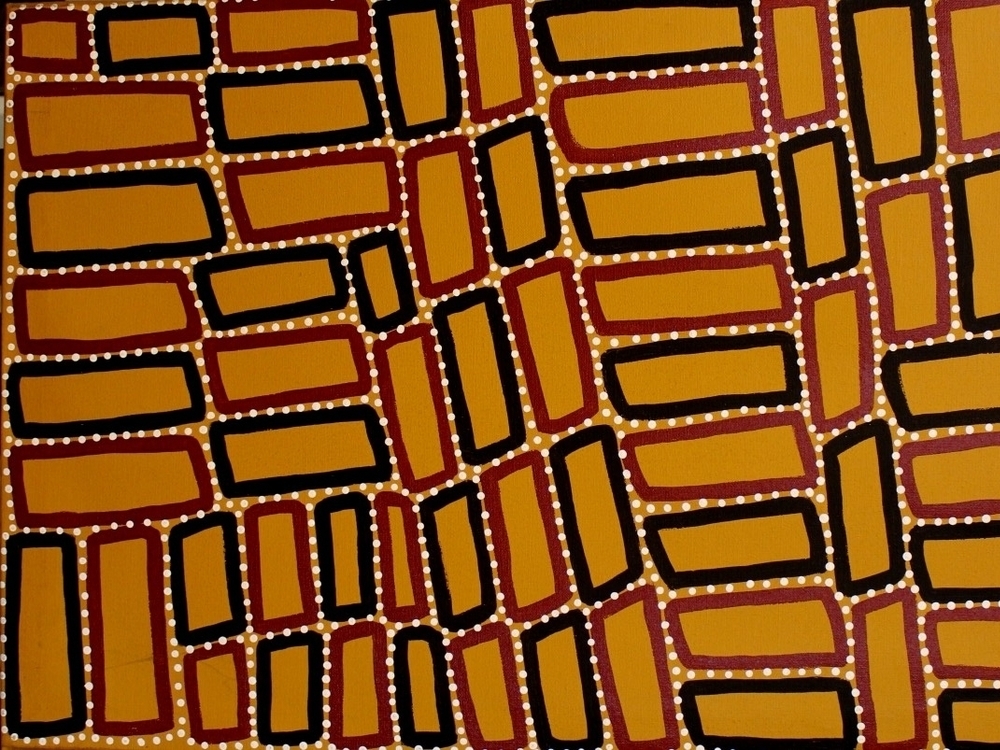 In late 1984, Walala Tjapaltjarri and several other members of the Pintupi tribe walked out of the remote wilderness of the Gibson Desert in Western Australia and made contact for the first time with European society. Described as ‘The Lost Tribe”, he and his family created international headlines.

Until that day in 1984, Walala and his family lived the tradtional and nomadic life of a hunter-gatherer society. Their intimate knowledge of the land, its flora and fauna and waterholes allowed them to survive, as their ancestors had for thousands of years.

It is this sacred landscape with its significant sites that Walala so strikingly describes in his paintings. His style is strongly gestural and boldly graphic, one that is generally highlighted by a series of rectangles set against a monochrome back ground. He paints the

Tingari Cycle (a series of sacred and secret mythological song cycles) which are associated with the artist’s many dreaming sites—they are Wilkinkarra, Marau, Tarrku, Njami and Yarrawangu, to name a few. These Dreamings are the locations of significant rockholes, sandhills, sacred mountains and water soakages in the Gibson Desert.

Walala Tjapaltjarri was first introduced to painting by his brother Warlimpirrnga, also a painter of international acclaim. While Walala’s first painting were in a classical Tingari style usually reserved for body painting, ground painting and the decoration of traditional artifacts, within a couple of months of painting he evolved his own innovation style of work. He began abstracting the classical Pintupi designs, creating a highly graphic language to speak of his country and ceremonial sites. The rectangles so prominent in his paintings from both a physical and spiritual map establishing Walala as a discerning draughtsman for his ancient country.

Walla’s family lived in the desert for this long without detection because they use to walk on spinifex clumps around Lake MacKay so they didn’t leave footprints. Lake MacKay is a massive salt lake that was once an inland sea and has islands with fresh water springs. They finally walked into Kiwirrkurra in 1984 due to a severe drought, which had dried up all of the springs and depleted the bush foods they had previously been surviving on.